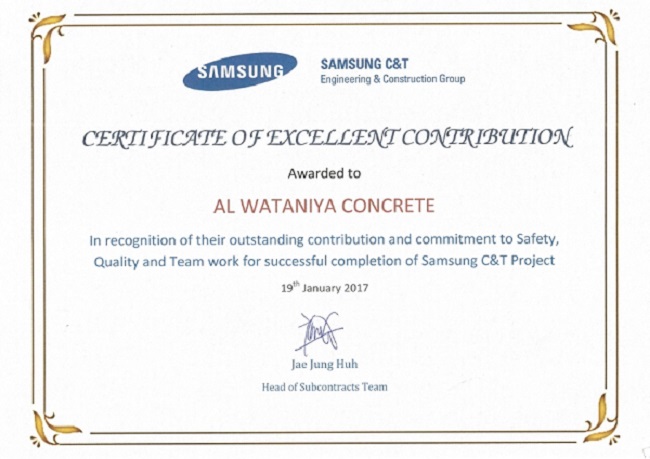 A Delegation from the Kuwaiti Ashghal Authority have visited Qatar on 7 June 2009, to analyze the progress of Qatari Concrete Industry; and due to the efficiency level that Al Wataniya Concrete Company represents in the state of Qatar, the company was selected to be a model for the Kuwaiti delegate representing the progress that this industry has reached to in the country. the delegation paid a visit to Al Wataniya Concrete Mesaieed branch, were they met with the company's operations team. the delegation then where briefed by Eng. Saeed Joudeh -Technical Manager- about the company's establishment and progress, then reviewed the stringent Quality measures which are taken to ensure a high quality concrete and the training courses in which the company's employees benefit from in its various departments. during the presentation, Engineer Saeed explained the difference between the mixing methods and the effect of each type on the concrete. The delegate then toured the plant and witnessed a practical mixing operation.

Project Qatar Exhibition in which took place at Qatar International Exhibition Center was the biggest construction related exhibition ever been done in the country, and have witnessed an extraordinary participation from countries around the world. Through the exhibition Al Wataniya Concrete was able to astonish its visitors with the accomplishments that it had achieved since established in 2005, in addition to taking the opportunity to uncover its plants of expansion in Dukhan area. Al Wataniya Concrete Dukhan Plant Location is one of the cities that were included in Qatar's phenomenal development plan, where the city it is expected to become one of Qatar's most important cities, considering that it will become the hub connecting Qatar to Bahrain through a causeway built across the sea between the two countries.